Back in 2006, there were these two crews who threw rad parties: False Profit and Downlow. False Profit was a friend group and LLC that had a ware-home and produced a variety of parties in underground SF venues. Downlow was a smaller crew that threw renegade parties at beautiful outdoor locations around the Bay. Both crews were independently thinking about throwing a camp-out. When they realized they were both thinking about the same thing, they decided to combine forces. Someone (his name was Stephen) found Belden and planning progressed from there. Influenced by False Profit’s party naming conventions, they decided on the name Priceless. The name of the event was meant to remind campers that you can’t put a price on the value of a weekend in the woods relaxing and dancing with your friends.

Our first year was successful, with approximately 400 people on site and tickets that were sold in three tiers at $35, $45, and $55 for the small scrappy bare-bones party under the radar of Plumas County. Dirt stage’s deco consisted of an EZ-up decorated with fabric and lights. False Profit volunteers acted as security guards, and our med school student friends took on-call shifts as medics. And the guys who would later become the Glitch Mob played at underground friends’ rates as the Troubled Youth Mashup.

After that first year False Profit absorbed the folks from Downlow who were interested in continuing to produce the campout, and the event moved forward under False Profit’s name. Some highlights… 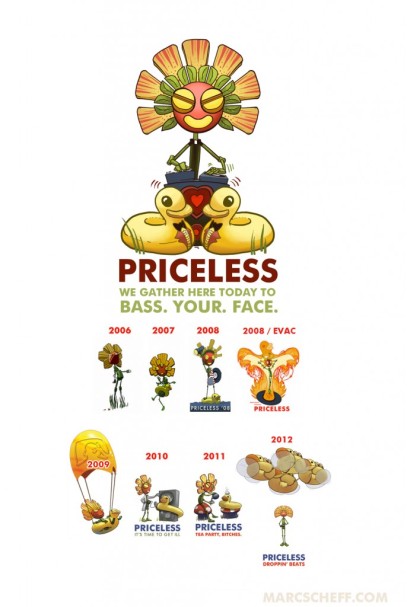 Over the years, the team throwing the event (the Priceless Planners) grew and changed; more and more people asked to join or were recruited to be part of the volunteer community of folks who love working together to make Priceless happen. Priceless is now maxed out at 1150 bodies on site, with about a third of those bodies dedicated to creating the experience via their time spent on production, music, art, or activities.

Thanks for joining us for this walk through history, and we look forward to dancing with you this July and for many more summers to follow!